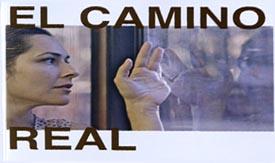 Produced and Directed by David McClendon

Synopsis: Elena (Dahlia Waingort) makes the fateful decision to leave her husband and child, and travel to Mexico to be with her dying father. Being undocumented, she is forced to make her way back across the border to the U.S. as best she can…unaware that out-of-control wildfires block her path home.

For news, photos, and videos go to elcaminorealfilm.com 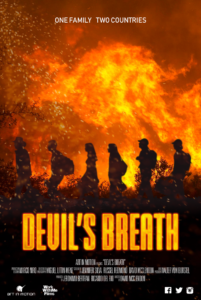 In association with ART IN MOTION INTERNATIONAL

Inspired by actual events, DEVIL’S BREATH explores the tragic, and often fatal consequences of being an undocumented immigrant in the United States.

PLOT SUMMARY:  Elena, an immigrant “Dreamer” and Miguel, an undocumented immigrant along with their children, Isabella and Michael, are doing their best to live the American Dream. Unexpectedly, Elena receives news from her mother, Carmen,  that her father, Enrique, is close to death.  Although she has not returned to their Baja village in over twenty years, the choice is made that she and her son will travel to Mexico to see her mother and be with her father one last time.  In his final hours, Elena’s painter-philosopher-opera aficionado father, teaches his grandson about his rich Mexican heritage.  After Enrique’s death, Elena and Michael, begin their journey home to the United States.  Aware of the wildfires that are growing along the border, Miguel and Isabella anxiously await their return.  At the border, Elena is turned back by immigration officials and Michael is held in a detention facility.  With Miguel unable to free their son without being arrested and deported Elena is forced to hire a human smuggler for the dangerous journey home – unaware that both man and nature are fatally out of control.

DIRECTOR’S STATEMENT:  In 2007, there was a series of wildfires along the Border of California and Mexico.  After the fires subsided, the bodies of eleven people were found in the countryside east of San Diego.  Seven of those were undocumented immigrants.  One of those killed was a wife and mother, who with her husband and children had been living as Americans in San Diego for years.  However, being undocumented, like so many others, they were forced to live a dual existence.  On that fateful day, while fires burned out of control, and without documentation she was forced to cross the United States/Mexican border illegally.  It is their story that inspired DEVIL’S BREATH (a Native American name for the Santa Anna winds), which represents the physical, social and emotional paths these undocumented Americans are forced to take.

Although DEVIL’S BREATH is the story of one family, it is a family that represents an entire subculture of our society.  Their number includes not just the workers we see in the parking lot of big box stores, or who work in the fields, or in restaurants, or wherever else they are needed, they also include the thousands of “Dreamers” who through no fault of their own might, at any moment, be taken from the only life they have ever known.  There are millions of undocumented Americans who are involved in their children’s schools, in their churches and their communities, who pay taxes and are our friends and neighbors.  The only difference is that they are in the United States without legal documentation and without a clear path to validation.  It is their story we wish to tell while helping our fellow citizens become aware of the complexities, challenges and injustices placed upon this segment of our population.

THE ROAD TO DISAPPEARANCE

Following the death of her former Tribal Chief father, Joy McIntosh returns to her Oklahoma home after being banished from both her family and Tribe.  Her transgression was, as an investigative reporter, exposing corruption from within the community and Tribal leadership, which lead to her father and others being charged with Federal crimes.  Her book that followed, “The Road To Disappearance”, became an award winning best seller and is being made into a feature film.  Now that her father has passed, her hope is to come home so that she can create a new life with her family and this place that means so much to her.   She, along with a new generation of local and Tribal leaders hope to do what they can to help both the Tribe and the town find a way to heal and end their long and complicated decline.  It is the story of a people, a family, a town and their struggle for survival in today’s world.